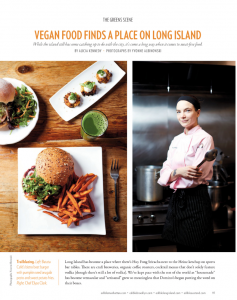 “Elyse Clark, who got her start as a chef in the raw food scene at the late Live Island Café in Huntington before deciding to

seriously pursue culinary studies at the Natural Gourmet Institute. “I was a thorough believer that I could just learn on my own,” she says, “then I realized that I wasn’t challenging myself.” We spoke at Batata Café in Northport, where she’s spearheaded their vegan offerings, right underneath the restaurant’s massive “VEGAN MENU” sign, which beckons drivers in from 25A. She told me a story similar to that of Astafa’s: Once she started cooking up veggie burgers and seitan warps, sales outpaced the meati

er options. That sort of hybrid menu is where Clark sees the potential to change people’s minds about what vegan food is; you can appeal to both the yogi, who wants her microgreens and chia pudding, and the vegan-curious person who might opt to try a veggie burger rather than the standard when presented with the choice.”